The History of the Tenth

It was in Edwardian Belfast that a gang of boys first tied scarves round their necks and called themselves the ‘Bloomfield Patrol’.  It was an unhealthy city.  Slums were commonplace, as were tuberculosis and typhoid.  Children’s coughs and colds caused alarm.  Middle-class families were leaving the city centre for new suburbs springing up alongside the tramways.  The 10th Belfast was born in those suburbs, in the east of the city, in a district bounded by high ground that would be roamed by generations of Scouts – the Holywood and Castlereagh Hills.

A painting by J W Carey of a Scout in the Castlereagh Hills, possibly modelled on Brian Boyd, one of the Bloomfield Patrol

Many of the friends who formed the Bloomfield Patrol in 1908 started out as Boys’ Brigade Scouts: the 20th Belfast Company at Mountpottinger YMCA had a Patrol by late 1907.

Robert Baden-Powell, a hero of the Empire after his defence of Mafeking in the Boer War, had introduced this early version of Scouting to the BB in 1906.  After Scouting for Boys appeared in early 1908, however, ‘Lone Patrols’ began to spring up independently of the Brigade.  In Oakland Avenue, boys gathered on the waste ground where the McMordie Scout Hall would later stand. 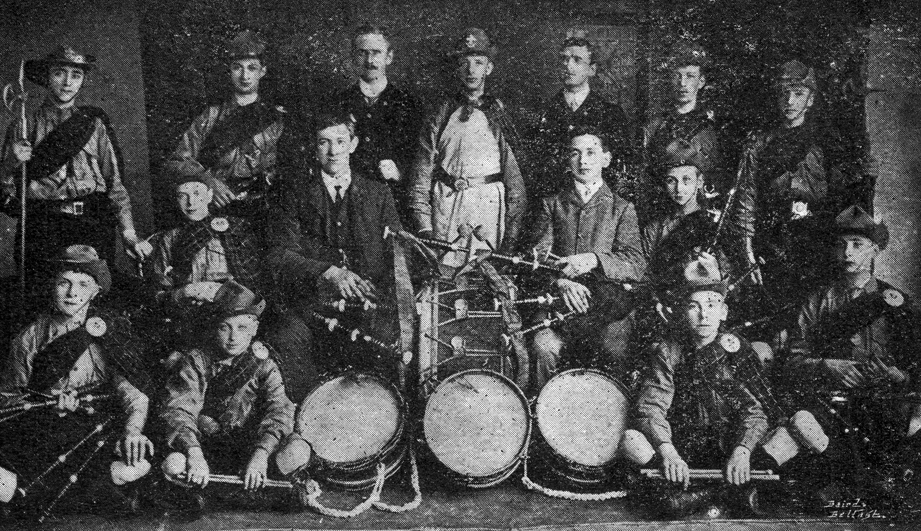 One of those boys, Bob Curry, recalled:

Our hats were old Boer War head-gear; we carried broomsticks or old brush shafts marked off in feet and inches. Some of the haversacks were home-made, others were old war stock.  Our shorts were, in some cases, made from our fathers’ old trousers – they were called “shorty-longs” as they often came down to just below knee level.  The shoulder-knots were of coloured braid, ribbon or cloth and were 9” to 12” long…. We had a seamstress in Oakland Avenue, a Miss McMurray, who was willing and able to alter any old garments suitable for Scout wear.

Many ladies like Miss McMurray must have been kept busy as more and more Patrols and Troops started up.  Of special interest, as will become apparent, was the formation of the 11th Troop in the Connswater district in 1909.  Its Scoutmaster, John Paysden, lived at The Eagles on the Upper Newtownards Road, opposite Oakland Avenue.  For his Scouts, as for thousands of others, Scouting for Boys was a gateway to the worlds of the explorer and the frontiersman, the detective and the Red Indian.  Ironically, the same thirst for adventure would take many of this generation to the trenches of the First World War.

By 1910 the boys of the Bloomfield Patrol had identified a likely Scoutmaster.  The young man was a son of Thomas Keown, whose family lived at Dundela Villas, the big house beside the waste ground mentioned earlier.  Harry Keown was then a Patrol Leader with the 1st Holywood Troop, known locally as the ‘Shovel Shaft Marines’ because of the boys’ Scout staves.  Cycling home from a meeting in March 1910, Harry was halted by a boy called Fred Lewis.  On that gaslit roadside, Fred asked him to take charge.  “Why he asked me, or why I readily fell in with his suggestion, I do not know,” said Harry afterwards.  But the Patrol had chosen well: Henry Eugene Keown (‘The Boss’) would be associated with the Tenth until his death fifty-five years later. 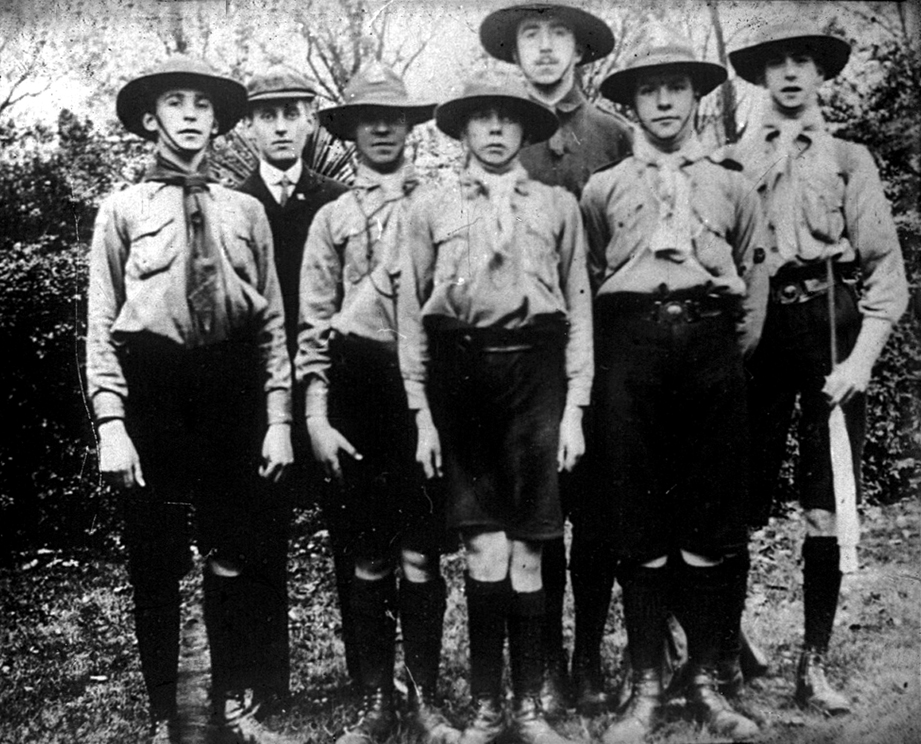 Uniforms worn by Scouts in 1910, in the garden of their Scoutmaster H.E. Keown’s home, Dundela Villas.

The as-yet-unnumbered Troop first met in the open air, in a lane which later became the Cairnburn Road.

Sign for Cairnburn Road, the Tenth’s first rallying point in 1910

Brian Boyd, Norman Carmichael, Sydney Hanna, Sam Hood, Fred Lewis, Henry Joy McCracken, Ralph Mitchell and A. Reid renamed themselves the ‘Owl Patrol’ and adopted royal blue as their colour.  Just a week later the 11th Troop amalgamated with the Owls as John Paysden had become a sea captain.  John remained an Assistant Scoutmaster of the Troop, which initially kept its headquarters in Connswater as well as its title of ‘11th Belfast’.  This suggests that a 10th Troop already existed elsewhere in the city.  However, Troops at this time were forming, amalgamating, and disbanding almost on a weekly basis.  Thus, on 19 April 1910 the Local Association overhauled the system, renumbering Troops in order of seniority.  The 11th Belfast became the ‘10th Belfast’, and was registered as such in London that month.  Harry Keown was warranted as its Scoutmaster on 2 May 1910.

Two early groups of Boy Scouts therefore went to the making of the Tenth: the Bloomfield Patrol of 1908 and the 11th Troop of 1909 – of which Harry Keown was effectively the second Scoutmaster.  His 10th Belfast did not acquire that title until 1910, but the Troop’s roots go back to the beginning of the movement.