Juniors and Seniors in the Tenth

Scouting had been designed for boys over eleven, but younger brothers were always wanting to join in.  ‘Recruits…. must be at least 12 years of age and over 4’ 9” in height,’ declared the Tenth in 1915.  This safeguarded the Troop’s character but must have dismayed many a young boy.  Baden-Powell’s Wolf Cub’s Handbook solved the problem.  After its publication in December 1916, the Pack that would become affiliated to the 10th Troop started up at Sydenham Methodist Church.  Jack Camlin was one of the first to join, in March 1917.  (His younger brother Ernie, also a member of the Tenth, later achieved celebrity as the ‘Ulster Frogman’.)  The Pack was registered in June 1917 as the ‘7th Belfast’.  Its link to the Tenth led to it taking the Troop’s number – in line with a national policy – in 1920. 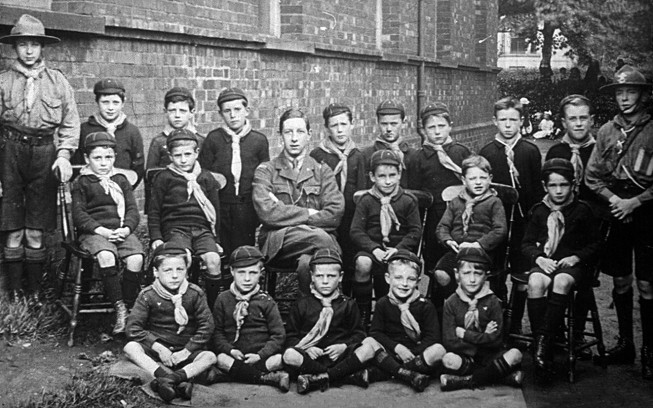 The earliest known photograph of the Pack, with Cubmaster Harold Tyrrell, taken in 1917 when it was still known as the 7th Belfast

Also in 1920, but at the other end of the scale, appears the first mention of a 10th Rover Crew.  William Cameron was the leader then, but little else is certain: the Crew soon disbanded.  In September 1923, however, the nucleus of another Crew was formed by PL Reggie Millar and James Newberry of the Curlews, with ASM George Thompson as Rover Mate.  Monday was Crew night, when there might be a guest speaker or a discussion on anything from gambling to local government.  Reggie assumed the leadership in 1924 and by 1926 there were ten members with a shared love of hiking that took them on treks through Donegal and the Scottish Highlands, and on many weekend rambles closer to home.  Cross country running was a particular favourite.  George ran for Willowfield Harriers and Reggie for Ulsterville Harriers: they inspired a Tenth cross country tradition that endured until the 1960s.  They also helped train the Scouts for the Rotary Ambulance and the relay races.  At a time of chronic unemployment in Belfast, Rovering brought a sense of purpose to these young men’s lives. 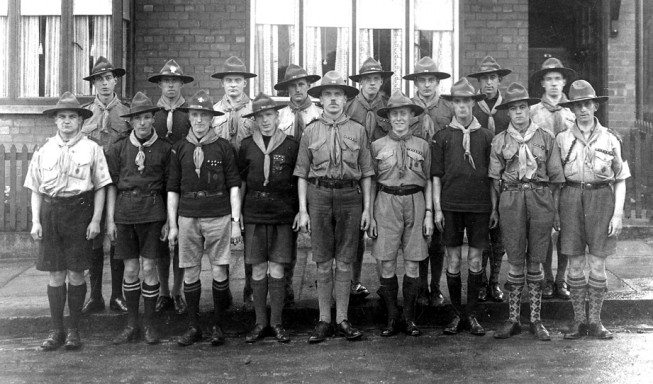 The Rover Crew in Oakland Avenue in 1931

A Senior Scout section was introduced to Scouting in 1946 to cater for the older boy: only one Scout in five was staying in the movement beyond the age of fifteen.  The adoption of a Senior Scout section was purely voluntary, though: it was recognised that some Scoutmasters had always managed to retain their older Scouts.  For Harry Keown, the problem was how to get rid of them.  In 1951 the Tenth implemented some of the new ideas – Scouts aged fifteen and over were reinvested and issued with maroon shoulder straps – but a separate Patrol was not formed: Senior Scouts remained part of the Troop.  From the younger boys’ point of view, their Patrol Leaders continued to be grown men, with day jobs at the likes of Shorts and Harland & Wolff.  The Rover Crew itself thrived in the 1950s. 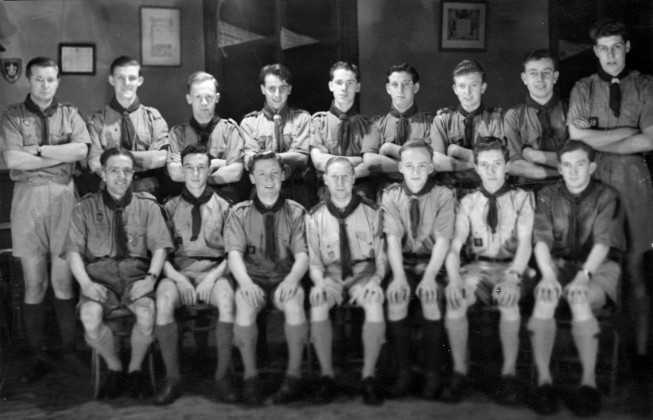 The Tenth staged its first old boys’ reunion as early as 1913.  A 10th Old Scouts’ Association existed for a short time during the 1930s, but there was nothing official until the launch of the B.-P. Guild of Old Scouts in 1948.  A 10th Guild was formed after a reunion that year.  Over a hundred men eventually joined up, making it the largest Guild in Northern Ireland.  It had a golfing society, a summer ‘billycan outing’, and an annual reunion.  Dick Tyrrell was the chairman, Alec Gregg the treasurer, and Bob Curry the secretary.  For many years Bob was also secretary of the Northern Ireland Guild.

Formed in 1956 for men who were too old for the Rover Crew but who wanted to stay with the Tenth, the ‘over 24s’ acted as hall caretakers until the early 1960s. The Tenth owes a big debt to such people.  Dedicated bands of workers like the Parents’ Committee and the Group Council (later the Group Committee) have always kept the Tenth afloat financially, organising jumble sales, barbeques, treasure hunts, dances, concerts.  ‘Long before we heard officially of ‘Voluntary Services’, wrote David Bleakley, ‘supporters of the 10th were showing how it should be done’. 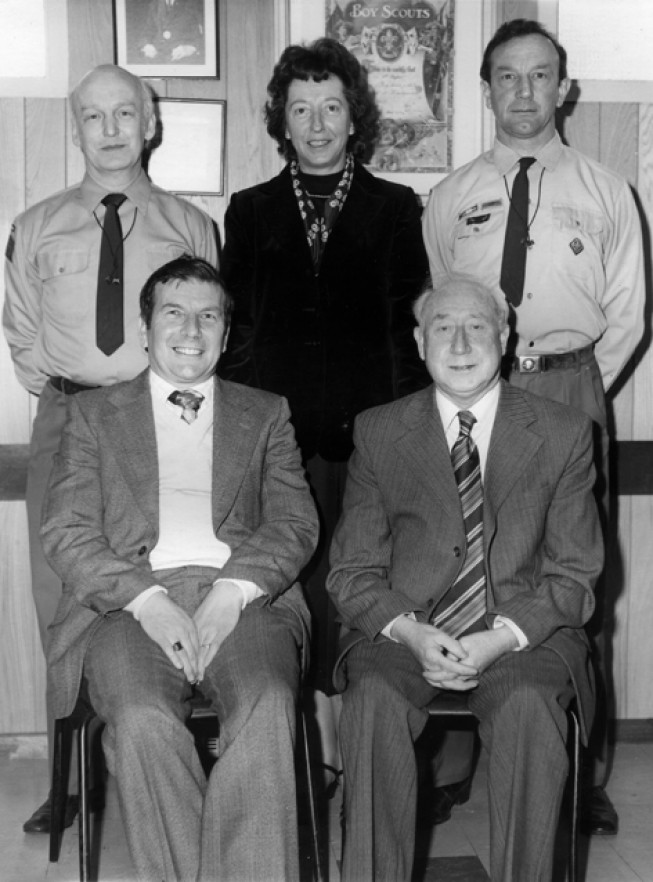 It was in Northern Ireland in the 1960s that the idea of a section for boys below Cub age first took shape.  The Beaver Association was established following a conference in 1968 and in September of that year the first Beavers appeared at the Tenth.  These future Cubs and Scouts, Venture Scouts and Scouters, took their early steps under the guidance of Joan Hayhurst.  An even younger section for the four to six year olds was also pioneered in Northern Ireland.  The first group may have appeared as early as 1974, and there were around twenty-two in existence by 1992, all but two going under the name of ‘Squirrels’.  In truth, the Tenth had always had its underage Beavers, but pressure built as other east Belfast Scout Groups began to introduce Squirrels.  At a time of increasing competition for youngsters’ loyalties, it seemed to make sense to offer them a royal blue scarf as early as possible.  In October 1991 the Group Council approved Ian Diamond’s proposal to investigate setting up the Tenth’s own Squirrel Drey.  It got underway in January 1992. 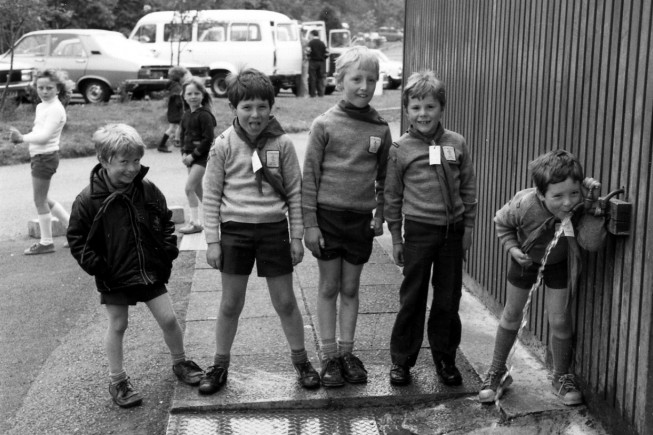 Venture Scouting, the successor to Rovering, got off to a shaky start at the Tenth.  By 1967, on reaching leaving age (which had been lowered to sixteen years), boys were drifting away to join David Patterson’s Knock Area Venture Unit, the successor to David Harrison’s Knock Area Rover Crew.  ‘It is hoped that these boys will train for a period and then be the basis for a Unit based here,’ was how the Group Council consoled itself in August 1967.  Some boys did keep their links with the Tenth – Venture Scouts are mentioned as camping with the Troop at Tipperary Wood over Easter 1968 – but many simply lost touch.  In 1969, therefore, Harry Diamond pressed again for the formation of the Group’s own Unit.  It finally got started in February 1970, with Norman Willis in charge for the first six months or so, followed by Ronnie Browne. 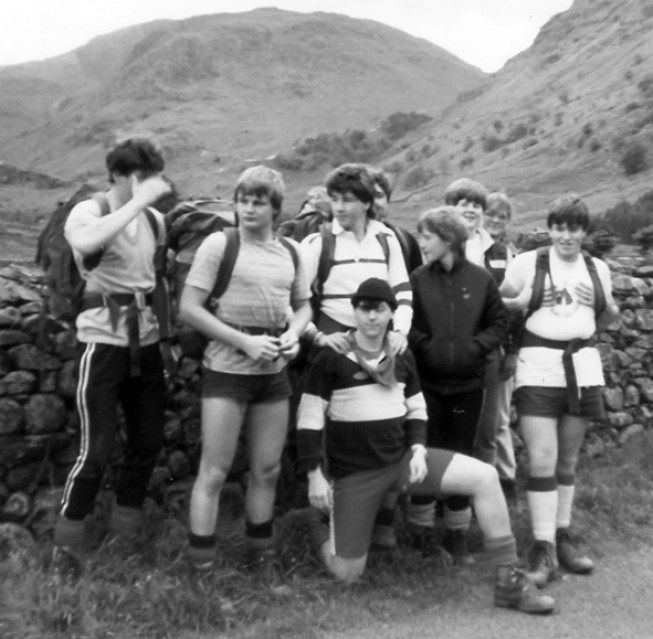 Most recently, with a restructuring of the age range for Scouts, an Explorer Unit for fourteen to eighteen year olds, led by Mike Loder, has been based at the McMordie Scout Hall. 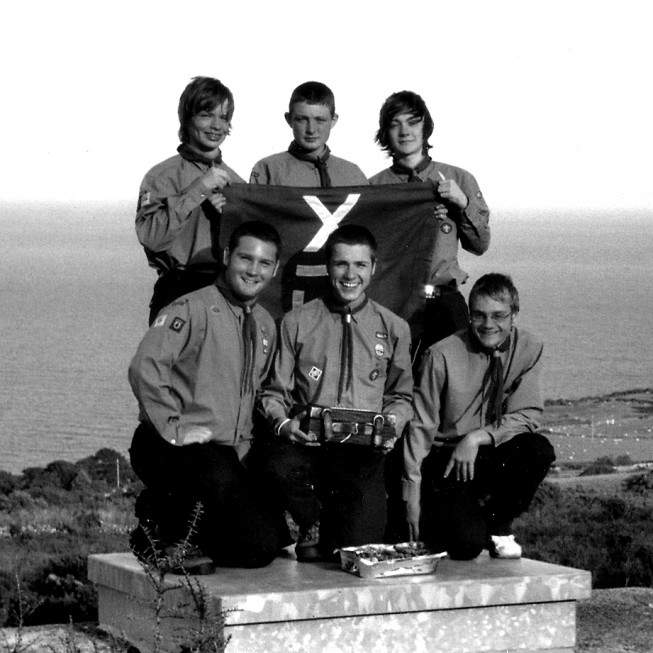 Explorer investiture in the Mournes, 2006