The most significant distinctions achieved by the Tenth have been the collective Medals of Merit awarded by the Boy Scout Association (in 1931) and the Catholic Boy Scouts of Ireland (in 1991).  When the British Medal of Merit was conferred in 1931, only twelve such awards had been made worldwide up to that time.  Troops that fed children during the 1921 coal strike received it.  The 10th British Guiana Troop got it for services at ‘a disaster which occurred on board the S.S. Essequibo on May 24th 1926.’  There was an intriguing award to Nigerian Scouts in 1935, ‘for their timely intervention in rescuing a would-be assassin from an infuriated crowd, on the occasion of the attempted assassination of the Awujele, at his palace on October 20th, 1934.’  The Tenth alone received it for services to Scouting.  ‘For good work’ is the simple citation: recognition of an unparalleled contribution to the development of Scouting in Ireland. 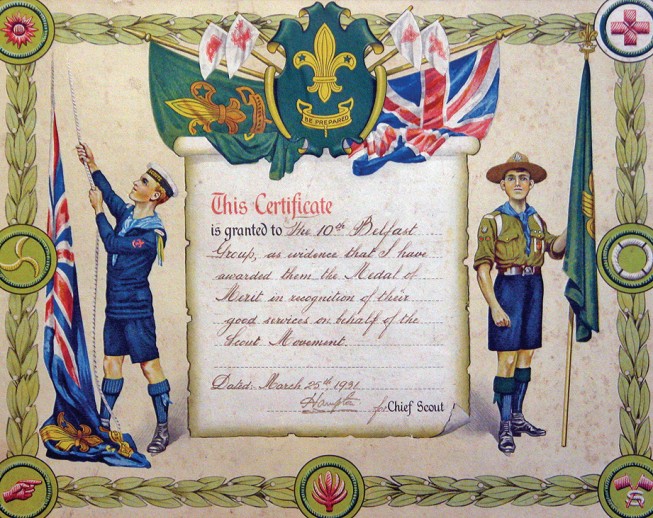 Certificate of the Medal of Merit awarded to the 10th Belfast, 1931

The award of the Irish Silver Medal of Merit sixty years later made the Tenth the only Scout Group known to have been honoured collectively by two different Scout Associations.  The award came as a complete surprise at the closing ceremony of the Melvin competition in Tollymore on 25 August 1991.  Received by Mike Loder from Kiernan Gildea, National Commissioner for Scouts, it recognised the Troop’s longstanding involvement (and achievement) in that competition, and the associated commitment of the Tenth to cross-community and cross-border work. 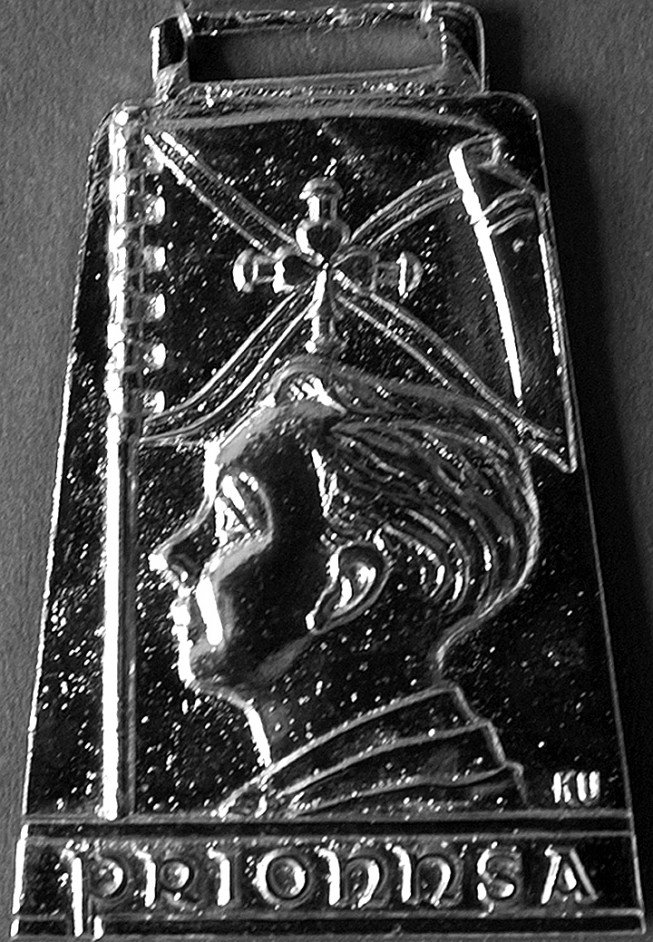 The Silver Medal of Merit, awarded to the Tenth by the CBSI in 1991

It was back in 1921, following the creation of the border in Ireland, that the most enduring Belfast Scout competition had its origins.  When the Northern Ireland parliament was opened by King George V, Scouts sold programmes of the event and a flag was purchased with the profits.  This ‘King’s Flag’ became the trophy for the Belfast County Flag competition, first held in 1922 when the Tenth won it.  In those days there was no separate contest – a Troop was judged by its performance in the relay races, in the first aid and signalling competitions, and by how many King’s Scouts it managed to turn out.  The flag stayed in Tenth hands literally for the rest of the 1920s. 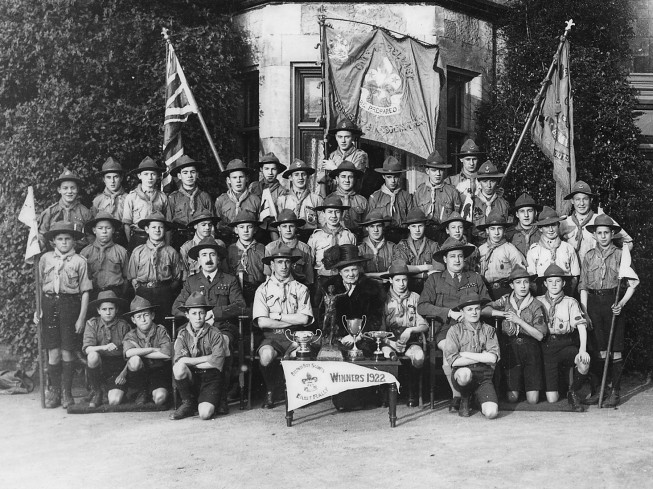 The Troop, first  winners of the King’s (County) Flag, at Cabin Hill with the Tenth’s President, Julia McMordie, 1922

Belfast to Carrickfergus was the route of some of the earliest relay races, but Gelston’s Corner at Strandtown to the bandstand in Bangor eventually became the preferred course, divided into ten stages of roughly a mile each.  In the junior and senior races between 1922 and 1929 the Tenth triumphed at least ten times.  Running, particularly cross country, would remain a strength of the Tenth over the years.  The Troop and Pack also dominated the signalling competitions, sometimes facing no opposition at all.  ‘Good luck to the team for their pluck in entering where other Troops fear to do so,’ remarked The Ulster Scout in 1926.  The Tenth’s successes prompted the same magazine to comment: ‘One is beginning to look around and wonder what the 10th can try to win now.’  This had not always been the case.  ‘For twelve years,’ said Harry Keown, ‘we failed in competitions, and I was proud that the 10th never protested, and always came up smiling for another effort.  Then our luck changed.’ 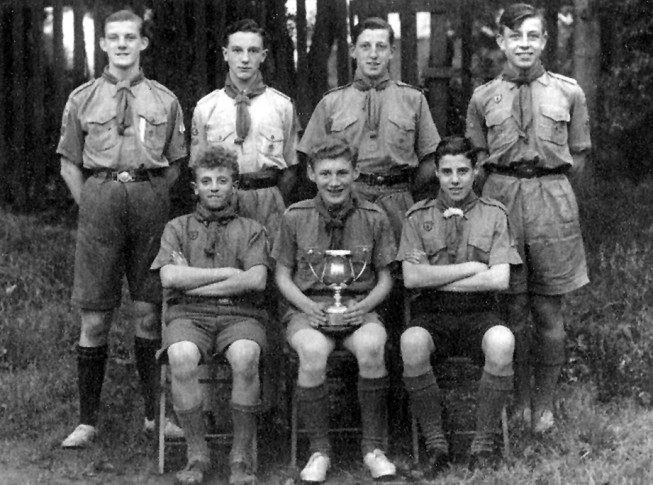 The Scouts first won the Rotary Ambulance Cup for first aid in 1927.  The Rotary Club had presented the cup in 1916 to mark ‘appreciation of service rendered by the boys to the Club’s Patriotic Work’.  Under the tuition of John Cairns in the 1950s, the Troop became almost unbeatable, and even assumed first aid responsibilities at some public events. 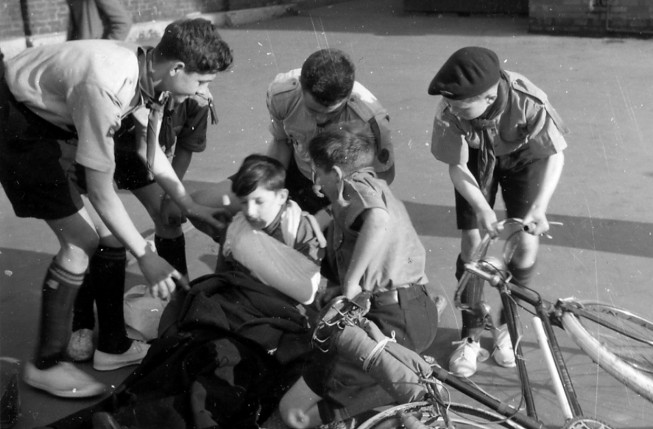 The Rotary Ambulance team at work in 1956

In 1952 Northern Ireland staged its first Soap Box Derby.  In 1953, after an earlier effort had petered out, ASM John Cairns suggested that the Tenth make another attempt to build a car.  John worked at the British Tabulating Machine factory on Montgomery Road.  With the resources of this forerunner to ICL to call on, the Tenth produced the X / H.  Engineered like a Rolls Royce (in the boys’ minds anyway), but heavy and slow with it, the car was entered for the 1954 races at Luke’s Point, Bangor.  The 62nd Belfast dominated the event, taking first place in all three sections – Cub, Scout, and Senior Scout.  But it was crucial learning experience.  The following years, in Blue Bird and then Banshee, it was the Tenth’s turn to sweep the board. 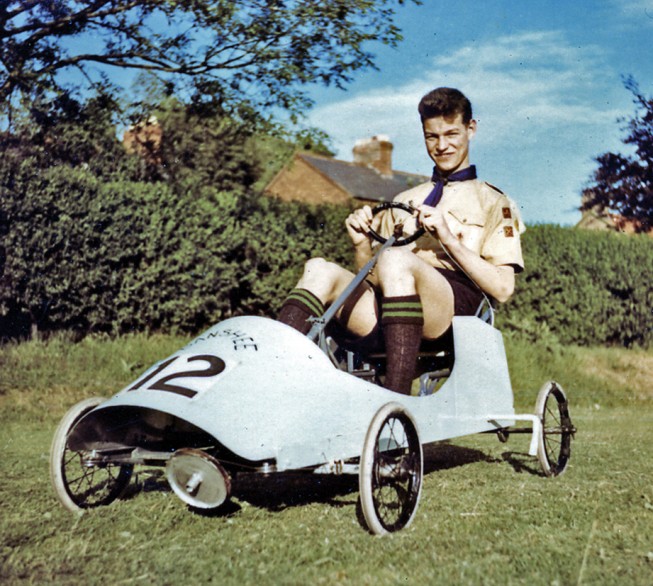 The County Flag contest became an event in itself in the 1930s, taking the form of a weekend camp.  The Troop still fared well, usually finishing among the top three, but by 1969 thirty-two years had passed without a victory.  As the King’s Flag was being replaced by a new standard that year, Easter camp at Crawfordsburn saw some serious training.  The effort paid off.  The first Troop to win the King’s Flag became the first to carry its successor.  Two hat-tricks have since been notched up – from 1994 to 1996, and from 2003 and 2005. 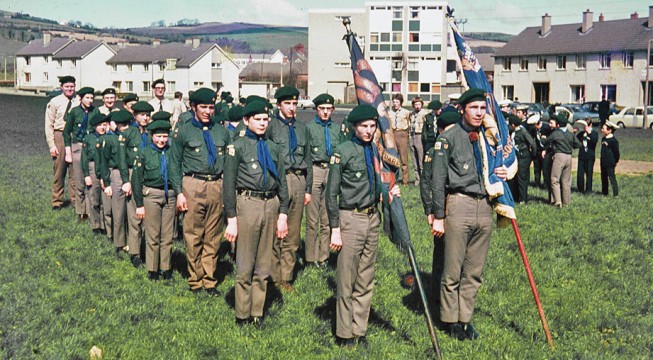 The Troop on St George’s Day with the brand new County Flag, 1970

The Cubs have had success in their version of the County Flag too, winning the competition four times in the 1920s and 1930s and – when the contest was restarted – again in 1987 (jointly with the 4th Belfast).  That happily coincided with the Pack’s seventieth anniversary. 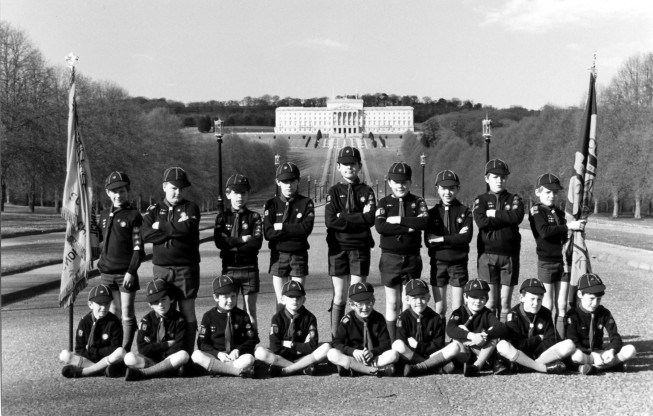 The Pack on St George’s Day with the County Flag, 1988

Finally, the longest running of all the Tenth’s trophies is an internal award.  The 10th Belfast Boy Scouts Troop Challenge Cup, better known as the ‘Scout of the Year Cup’, was presented by Lieutenant H. E. Keown in 1917, when he was serving with the army during World War 1.  The trophy is awarded on the basis of votes cast by the Scouts themselves. 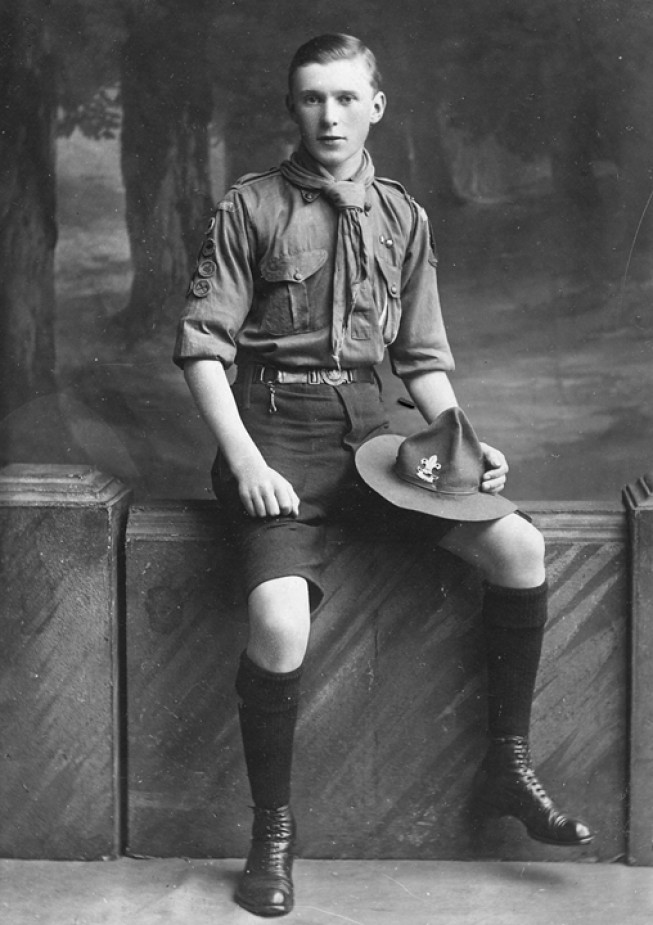 Robert Greenlees, first winner of the Scout of the Year Cup, 1917.

Winners of the Scout of the Year Cup: 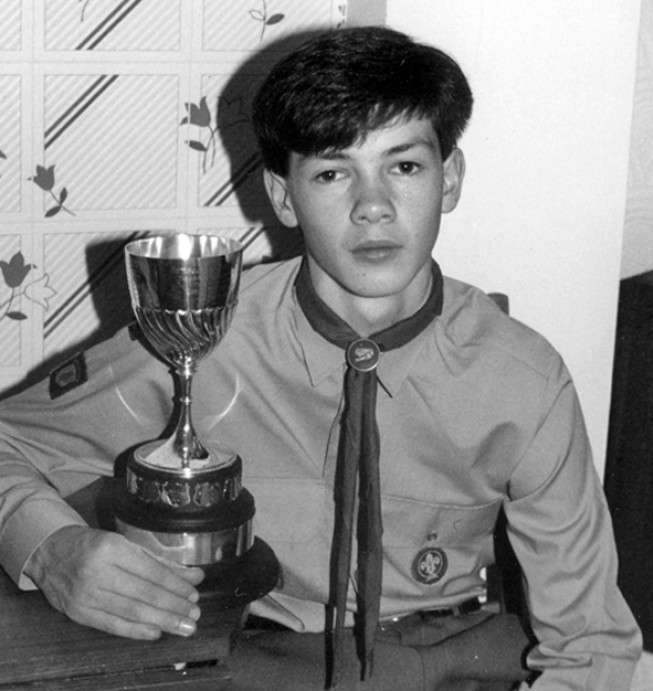 The current Scout Leader, Robert McKissick, Scout of the Year in 1987