Troop summer camps during the first years took place mainly along the coast of north Down, at Rockport, Ballyferris, Orlock, and Portavo.    In the days of empty roads a seven mile journey with a trek cart was a great adventure.  When the Troop first pitched bell tents in 1910 at Rockport, even the officers were first-time campers.  But a style was established then that would become the Tenth’s hallmark.  George McFall, the Tenth’s first historian, explains:

The entire work from start to finish was done by the Scouts, which means that not only were tents pitched and a suitable fireplace made, but all the food was cooked by the boys under the direction of the Camp Officer…. many of [these boys], who afterwards served with the army in France and elsewhere, were able to put into practice the valuable lessons learned in this and subsequent Troop Camps. 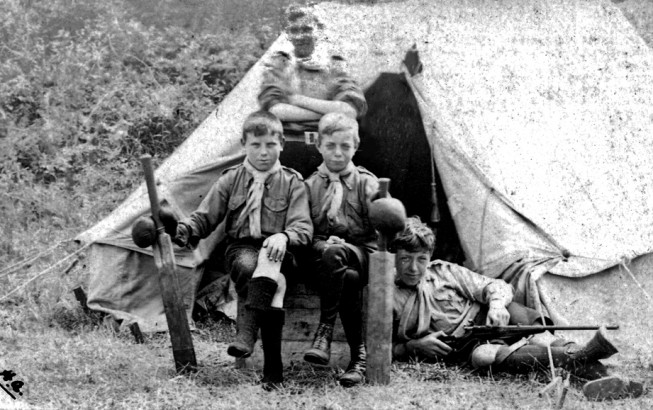 Summer camp 1914 at Orlock, near Groomsport.  The boy on the right is holding the Troop’s rifle, which was brought to every camp for the Patrol Leaders to shoot rabbits for making stew

From 1915 to 1923 the Troop had the use of a small glen on a farm near Dundonald.  Smyth’s farm, off the Stoney Road, was the site of many an Easter camp and Patrol camp, most memorably when it snowed at Easter 1916.  Bell tents would again provide a home for many former Scouts when they joined the Army during World War 1. 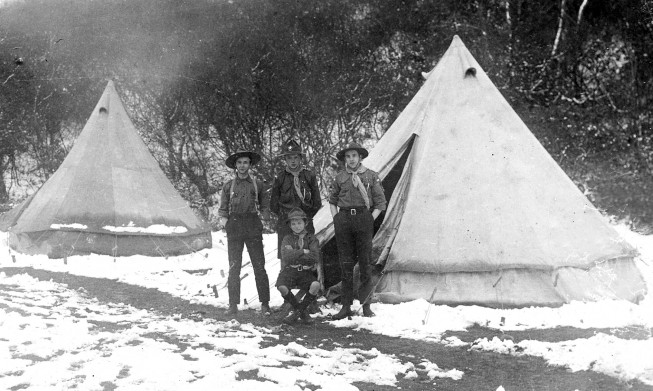 Under canvas in the snow at Easter camp, 1916

The greatest of all camps are the World Jamborees, and there have been 10th Scouts at most of them.   Graham McKee, a 10th Scouter and lead singer with the band ‘Bel’s Boys’, performed at the opening concert of the centenary World Jamboree in 2008. 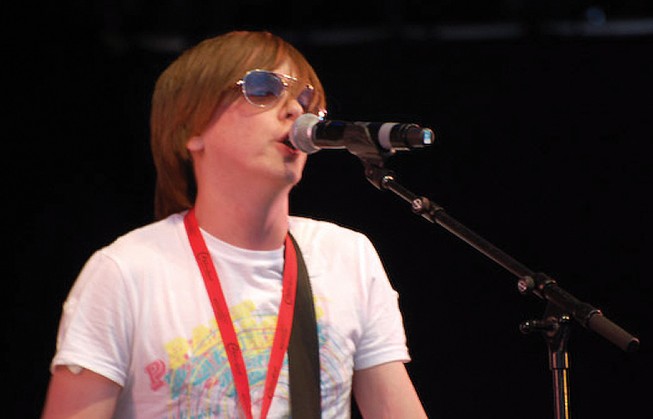 ASL Graham McKee on stage in front of 40,000 Scouts at the opening of the centenary World Jamboree, 2008

Ian Diamond led the Northern Ireland contingent to the World Jamboree in Australia in 1988.  Most of the Troop, and two of the Cubs, were present at the very first Jamboree at Olympia in London in 1920.  The Tenth’s Scoutmaster, H.E. Keown, also led the Belfast contingent, some two hundred strong.  The boys received a subsidy of £1,000 from the Rotary Club which reduced the camp fee from £8 to £3.  The flag that headed the contingent was carried throughout by PL Alec Gregg of the Tenth.

The Belfast contingent at the first World Jamboree camp site in the Old Deer Park at Richmond, London, 1920.  The Scouts put on daily exhibitions for the public at Olympia

The 1920s and 1930s witnessed many summer camps along the west coast of Scotland, with the Scouts travelling steerage on the ferry to keep costs down.  Transport on land could be just as basic. 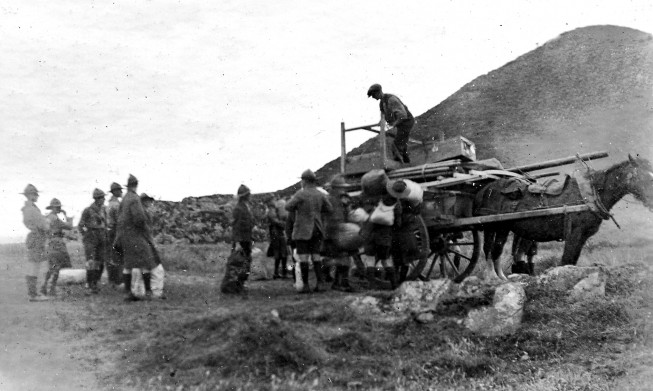 Scoutmaster Harry Howe encountered an unusual transport problem on the journey to summer camp 1939, as Larry Walker, a Scout at the time, recalled:

Harry had arranged the transport from the boat to the railway where we were to get the train for Wemyss Bay.  This consisted of one small Glaswegian man with a handcart…. With the strain of the mountain of tents, kitbags, and Patrol boxes, a wheel came off the cart.  Repairs were effected and the trek proceeded satisfactorily, but when we came to paying the man he made all kinds of demands for compensation because of his unfortunate mechanical breakdown.  But Harry would have none of this, and insisted on sticking to the original bargain.

That camp was the last before World War 2 broke out, and the following summer’s camp had to be cancelled because of the black-out.  Summer camps resumed in 1941, but gas masks had to be brought.  During this period the Troop camped twice at Ballinamallard, in an orchard belonging to Mr H. A. Burke, the local Scout Commissioner.  The apple trees supplied firewood, while the nearby railway supplied dead rabbits to supplement the rations.  Fermanagh had the same black-out conditions as elsewhere during the war, but there was one advantage.  Just across the border, in neutral Eire, chocolate was not rationed.  Smuggling it back on the train, however, concealed beneath uniforms on a hot summer’s day, was a messy business. 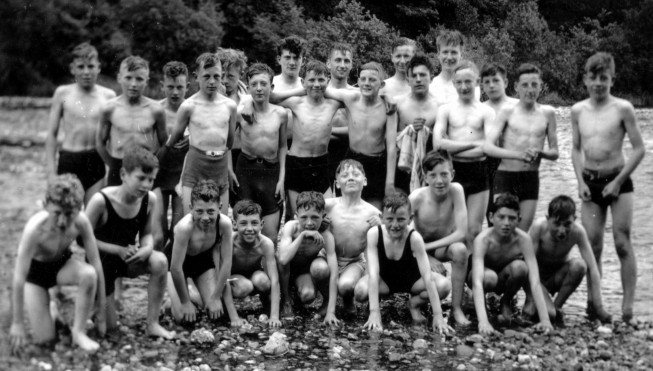 The Troop at summer camp at Sion Mills, 1945.  Wartime malnutrition is evident

The 1950s saw high standards of camping under Scouters Maurice Barr and John Cairns.  The Tenth’s golden anniversary year, 1959, saw a break from life under canvas, however, as  the Troop departed on its first continental camp.  A Scout hut in the middle of the Grand Prix track at Zaanvoort was the first night’s accommodation, followed by a youth hostel in Amsterdam.  Maurice Barr had allowed many of the older boys to extend for a year in the Troop so they could make the trip and, as anticipated, it was a ‘magnificent holiday’.  Everything went according to plan (except on the return journey, when half the Troop had to sail from Stranraer instead of Heysham).  The success of this first continental camp ensured it would not be the last. 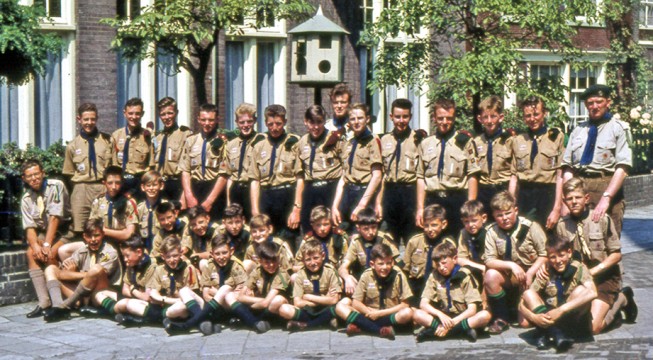 A prototype of the ‘survival weekend’ – a rite of passage at the Tenth from the 1970s – was Ronnie Browne’s hike up Slieve Donard with the older boys on New Year’s Eve 1966 to set off fireworks at midnight.  Dutifully reporting to the police station in Newcastle beforehand, in case the display was interpreted as a distress signal, Ronnie was initially treated with disbelief, and then informed that nobody would have gone up to check until the morning anyway.

Castlewellan Forest Park has been the destination for many an Easter camp from the 1970s through to the present day.  Beyond the daily routine of preparing for kit inspection, keeping the fires lit, and preparing meals, these camps have always largely depended on the Troop making its own fun.  But it could be a tough experience for the younger boys, particularly in the 1970s and 1980s. 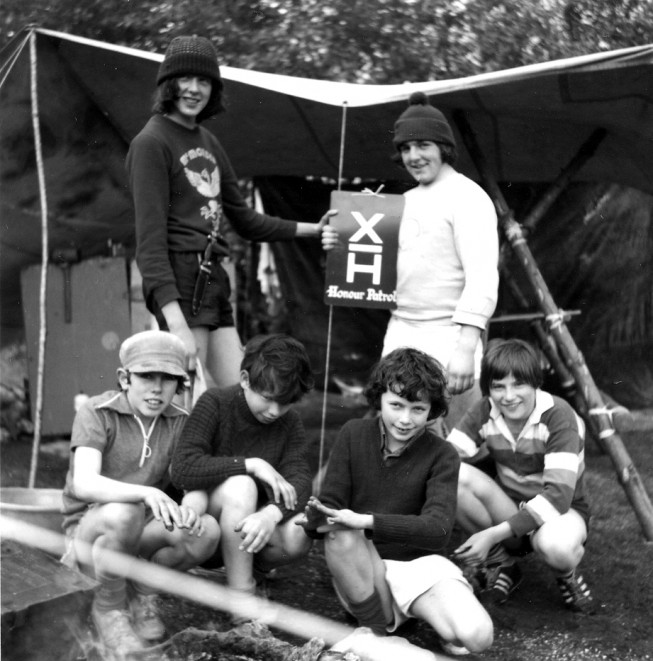 The Cubs too have had their share of Pack holidays under canvas, at least as far back as 1931 when they camped at Ballywalter.  Those were the days before sleeping bags and airbeds.  The first night was spent learning how to sleep on a straw palliasse, without rolling over on to someone else’s bed.  From the 1980s a popular location has been Slievenaman Schoolhouse in the Mournes, which allows tents to be pitched in the grounds. 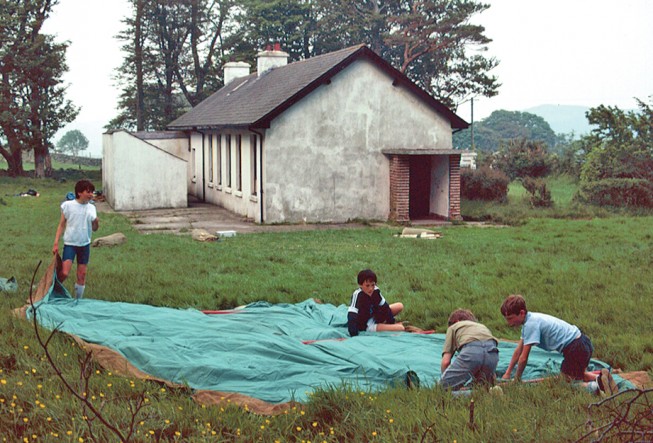 The Sixers pitching camp before the rest of the Pack arrives for summer camp at Slievenaman, 1986

Much of what the first Scouts experienced at camp remains attractive to the youngsters of the 21st century – singing round a fire in the hills as night closes in, a rope swing over a river, a sense of independence and adventure.  It remains central to what the Tenth has to offer. 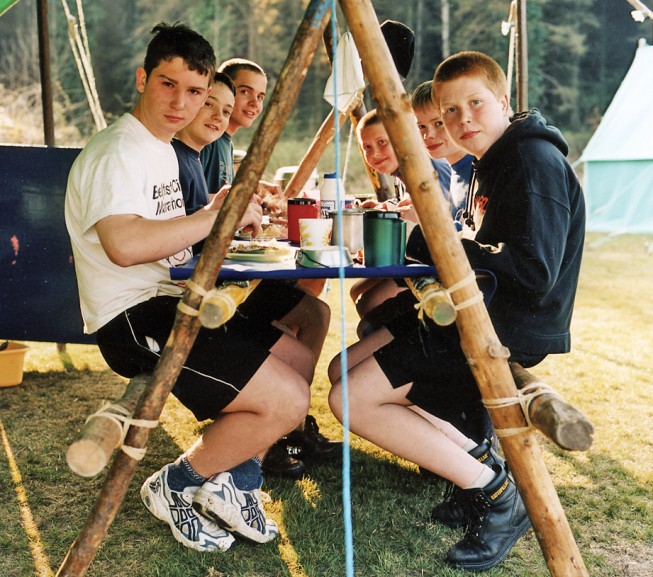